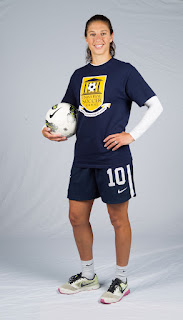 The first goal was a left-foot strike in the sixth minute of overtime. The player, a relative newbie on the international scene, called it “a dream come true, and also kind of shocking at the same time.”

The second goal came screaming off the right foot of an experienced, resurgent star. The shot blazed past the outstretched arms of the goalkeeper and tucked just inside the post.

The results were the same—Olympic gold. And they made USANA Brand Ambassador Carli Lloyd the only soccer player, male or female, to score a gold-medal-winning goal in two Olympics.

But that’s where the similarities end.

It took five years for Carli to find the game. Once she did, the soccer ball rarely left her feet.

Like so many others, her dreams were built on the United States Women’s National Team (USWNT) and their historic run to the 1999 Women’s World Cup title. Carli was in the stands for a game, watching her heroes.

Nine years later, she was the one mobbed by teammates after scoring her first gold-medal-winning goal in overtime against Brazil in Beijing. It made Carli the 2008 U.S. Soccer Athlete of the Year and launched her into stardom.

Carli, now a stalwart of the USWNT with over 100 international appearances, was suddenly on the bench. But an injury to a teammate during the first match put Carli back on the pitch.

“I wanted to prove my coach and my doubters wrong,” she says. “I waited for my opportunity and I got it and I made sure to seize it.”

Carli scored the winner in that first match and added a goal against Colombia later in the tournament. Then there was the gold-medal match against Japan. Carli scored both U.S. goals, writing her name in the record books.

Those goals will be part of Carli’s legacy, but they don’t tell the whole story. The buildup to these moments are filled with obstacles overcome and failures turned into lessons.

“You don’t learn if things are going well,” Carli says. “You learn from the obstacles and looking at the positives—as hard as that is.”

She almost quit the U.S. under-21 team. Competing with other stars for the first time was almost too hard. But she found a mentor and trainer who helped her refocus on soccer. Carli credits him with transforming her game on and off the field.

There were injuries—like the broken ankle in 2010—missed shots, tough losses, and setbacks. But Carli came out stronger. “I just keep fighting and fighting and raising the bar and exceed limits that don’t even exist yet,” she says.

And that’s the real difference between those two goals. The focus and determination that turns an opportunity into stardom and a little girl with a soccer ball into a legend.