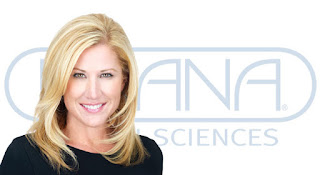 Jen Groover has been called a lot of things—a business expert, an innovator, a “One-Woman Brand” by Success Magazine, a leading “Serial Entrepreneur” by Entrepreneur Magazine, and, maybe most importantly, “Mom” by her daughters. Now you can also call Groover the newest member of the USANA family.

The sought-after speaker, business and lifestyle contributor to multiple major networks, and inventor is now a spokesperson for USANA, and will make an appearance at the upcoming SWEET Retreat. She brings with her a wealth of experience as an entrepreneur and the power to inspire people and help them reach their potential.

Groover has been involved with direct selling since 2000, and is a big fan of the industry. “What I love about the direct-sales world is the empowerment that the companies understand and give to the people within their organization,” she said.

Self-empowerment was an idea Groover started living early on. She was an entrepreneur right out of college because she wanted to find her own life and grow as fast as she could. With the creation of the Butler Bag, she found a springboard into what Groover feels she was truly meant to do.

“I knew that I had to follow that dream and purpose: to inspire and empower other people,” she said. “To push people to find their purpose and to create their own dreams.”

As a speaker at large corporate events, conventions, universities, and seminars, Groover has brought her message of personal empowerment to a lot of people. “It starts with belief in your own power,” she said. “We all have power. I tell my daughters all the time the greatest magic that exists is within your heart and your head.”

Although Groover is an industrious, successful businesswoman, she still has time for her family. And she understands what it means to mix the hustle and bustle of building a business with family time—something familiar to many USANA Associates.

“I measure my successes as a mother by the smiles on my kids’ faces that they wake up with every single morning and go to bed with every single night, and how they laugh every single day,” Groover said. “As an entrepreneur there is no separation in my life. I am what I am in every aspect of my life. But I love my life at home to inspire my life at work, and vice versa.”

Despite her extraordinary success, things haven’t always been great for Groover. She has also experienced the ups and downs of being an entrepreneur. But she’s learned to turn what some would call negatives into valuable learning experiences.

“Without those lessons, I can’t get smarter, and without those obstacles I can’t figure out better ways to do things,” Groover said. “Every challenge is an opportunity for you to look within to become stronger, better, smarter, and grow in ways that you can’t if everything is good.”

In Groover, USANA has found the perfect spokesperson: Someone who deeply understands the challenges and triumphs of being in business for yourself, and someone who can articulate those feelings to a wide audience and provide guidance and inspiration to entrepreneurs-in-waiting. She is certain to be an asset to USANA, and a valued member of the family.
Posted by petezdanis