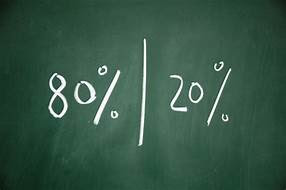 In 1906, Italian economist Vilfredo Pareto created a mathematical formula to describe the unequal distribution of wealth in his country, observing that twenty percent of the people owned eighty percent of the wealth. In the late 1940s, Dr. Joseph M. Juran inaccurately attributed the 80/20 Rule to Pareto, calling it Pareto's Principle. While it may be misnamed, Pareto's Principle or Pareto's Law as it is sometimes called, can be a very effective tool to help you build your USANA business effectively.

How It Can Help You:

The value of the Pareto Principle is that it reminds you to focus on the 20 percent that matters. Of the things you do during your day, only 20 percent really matter. Those 20 percent produce 80 percent of your results. Identify and focus on those things. When the fire drills of the day begin to sap your time, remind yourself of the 20 percent you need to focus on. If something in the schedule has to slip, if something isn't going to get done, make sure it's not part of that 20 percent.

As we have said so many times over, our job is to find "Motivated Entrepreneurs".

It is our opinion that motivation comes from within, and we cannot, nor should we, "drag people across the finish line" if they are not willing to help themselves.

We, too, have found that 80% of the people in our business have done little, if anything, to build their business or help themselves. However, the other 20% have helped us build an outstanding USANA business while, in turn, attaining all of their goals with USANA.

We have found that team members typically fall into one of several categories:

The Procrastinators - They'll begin building their business "when they get around to it." They never find the time because they never make the time.

The Know-It-Alls - These people don't take the time to "read the instructions" (The USANA Welcome Kit). It's beneath them to take the time to learn from those who have built successful USANA businesses, even though the path to success is laid out for them right under their nose. They couldn't tell you the difference between a BC, SVP and GSV.

The Paralysis By Analysis Victims - These people are constantly in "getting ready to get ready" mode. They are always searching for that perfect "system" that will magically build their business for them. They'll never find it because it doesn't exist.

The Whiners - Constantly complaining about minor details which have no impact on their ability to succeed in USANA. "If only this were different or that were different, I know I could make money in USANA." While these people are whining, there are thousands of people advancing in rank in USANA every month.

Motivated Entrepreneurs - These people "get it". They know that USANA's products and compensation plan are unequaled in the business. They set their goals, they develop a plan to reach their goals, they are trainable and coachable, and they go on about their business to work their plan. They advance in their USANA business while helping other people do the same. They make things happen while the other 80% are wondering what happened.

Our advice, don't try to motivate the unmotivated. Instead use your time wisely to find, sponsor and train "Motivated Entrepreneurs".

Show them how to succeed, and then get out of their way!

Don’t just “work smart”, work smart on the right things, and with the right people.

This article may only be copied, shared, distributed or otherwise reproduced in its entirety, including this disclaimer and copyright authorization.