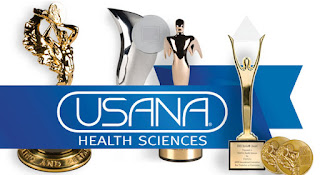 Best of State—the name says it all. USANA’s products have not only been named the best of state, but so far this year, we have also received 10 AVA Awards, six 2011 Multi-Level Marketing (MLM) Insider Awards, 14 Communicator Awards, and much more. That’s right. We’ve taken the “you name it, we win it” slogan to a whole new level this year. In just four months we received 43 awards, nearly as many as the record-breaking 45 accolades we took home last year. These awards not only boost the validity of our high-quality products, but also highlight the strengths of various departments within the company. There’s not enough space here to list them all, so here are a few of the awards we’re most proud of:
Best of StateTo date this year, USANA has received four Best of State awards, recognizing Rev3 Energy®, HealthPak™, MyHealthPak™, and our Research & Development department as the most outstanding nominees in their respective divisions in the state of Utah.AVA AwardsThe AVA Awards recognize the evolving role technology plays in the transfer of information, and honor excellence in digital evolution. USANA was presented with 10 AVA Awards for video productions, web design, and documentaries—once again proving that we are on the cutting edge.MLM Insider AwardsMLM Insider Online is the watchdog publication of multi-level marketing companies. Each year it hosts a survey to identify the best in the industry. USANA snagged six awards from the 2011 survey, naming us the number one company in network marketing, best nutritional company, best weight-loss company, and the company with the best compensation plan. Telly AwardsThe Telly Awards support creativity by honoring the finest film and video productions, locally and around the world. In 2011, the Telly Awards received more than 11,000 entries, and USANA rose to the top and claimed five awards—one silver and four bronze—for our The Healthy Home and WTA video clips.Service AwardsOur Customer Service department always takes service to the next level, and their efforts were recently recognized with a Customer Service Department of the Year Stevie Award. USANA also received a Communitas Award, which acknowledges our commitment to go above and beyond in serving our employees, community, and environment. Communicator AwardsUSANA’s Communications group raised the bar a little higher when it was recognized with an impressive 14 Communicator Awards. This prestigious international awards program recognizes big ideas in marketing and communications and honors the work that transcends innovation and makes a lasting impact. The list could go on, but let’s suffice it to say that USANA is moving ahead at an incredible rate and growing stronger with every award. Thanks to you and our world-class products, we have broken all our previous records and continue to press forward as leaders in the direct-selling industry.
Posted by petezdanis