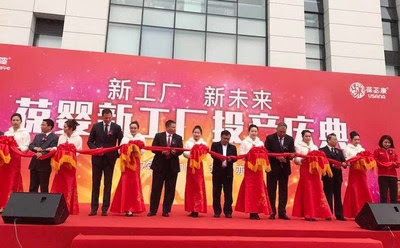 "It's an exciting time for BabyCare and our future in China," says Jim Brown, USANA president and chief operations officer. "BabyCare is well known for dedication to quality and safety, and you can see that dedication reflected throughout this new building. We are pleased we can provide quality products without compromise to customers through this state-of-the-art facility."

"We are committed to customer growth in China," says Bob Kupfer, vice president of global operations. "And we have built a new facility that will provide us with the capacity to satisfy customer demand for the foreseeable future."

USANA is currently operating in 20 markets throughout the world, and China represents one of its most important growth opportunities moving forward. BabyCare has achieved solid sales and customer growth in China for several years and this growth is just one of the factors that led to the Company's determination to construct a new facility in China.

Although the factory is located outside of the U.S., it maintains the same level of quality standards as USANA's facility in the U.S. The factory was also built according to requirements from the Chinese government, the China Food and Drug Administration, and the GB standard—the national standard of China. A high-tech air system was also installed to filter the air pollution in Beijing.

BabyCare Ltd., is a subsidiary of USANA Health Sciences, Inc. It manufactures high-quality nutritional products in its CFDA-registered facility in Beijing, China. BabyCare's nutritional supplements encompass two brands: BabyCare® for mothers and infants, and USANA® for adults. BabyCare's products are from pure materials and are designed to meet the entire family's nutritional needs.