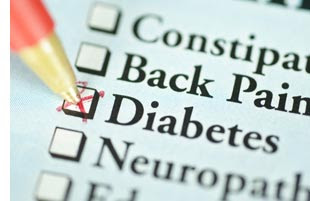 Without widespread intervention, one in three American adults could have type 2 diabetes by the year 2050. - Read more about this research below.
Type 2 diabetes is a chronic health condition that develops when the body becomes resistant to insulin, a hormone that regulates carbohydrate and fat metabolism. The exact mechanism by which type 2 diabetes occurs is unknown, but a number of correlating risk factors - particularly obesity and physical inactivity - are well-established. Unfortunately, the number of individuals with type 2 diabetes has increased sharply in recent years, with an estimated $174 billion cost to the United States in 2007 alone.
A number of papers have attempted to project type 2 diabetes prevalence 5, 10, and 20+ years into the future. Unfortunately, most of these projections have relied on weak or outdated metrics, including old census data, static mortality rates, and overly simple estimations of diabetes incidence. A recent paper from researchers at the National Center for Chronic Disease Prevention and Health Promotion hoped to overcome these weaknesses by utilizing recent census data and a matrix of factors derived from an extensive literature review.
The researchers describe their results as "a sobering picture of the future growth of diabetes." Their most optimistic values point to 21% of the U.S. adult population having type 2 diabetes in the year 2050. A middle-ground scenario predicts a prevalence of 25%-28%, while high-end data points to a diabetes prevalence of 33%, or 1 in 3 adults. To put these numbers in perspective, approximately 7% of the U.S. adult population had type 2 diabetes in 2007. In 1990, prevalence was below 5%.
Unlike some chronic diseases, type 2 diabetes risk can be reduced by relatively moderate lifestyle changes. Losing weight (if overweight or obese), improving dietary choices, and regular exercise are all known to reduce risk of acquiring type 2 diabetes. The authors of this paper note that such changes "can help to decrease loss in quality of life and the future cost of providing care for people with diabetes. Indeed, such efforts are essential if we hope to moderate or slow the growth of diabetes prevalence."
Boyle JP, Thompson TJ, Gregg EW, Barker LE, Williamson DF. Projection of the year 2050 burden of diabetes in the US adult population: dynamic modeling of incidence, mortality, and prediabetes prevalence. 2010. Population Health Metrics 8:29.
Posted by petezdanis