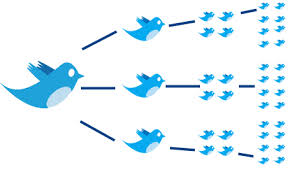 Your Twitter fan base will sometimes retweet information or links you share, but most followers will more frequently retweet tweets that are short, compelling, encouraging, and motivational. Getting “retweeted” is extremely valuable in helping you increase your Twitter fan base and the recognition of your personal brand. As people retweet your messages, they can literally reach millions of people over a relatively short period of time.

Below is a list of more than 50 quotations which continually generate thousands of retweets. They are presented in a format for you to easily copy, paste and tweet. Each one is about 120 characters or less (including quotation marks and reference).  You can also just click “Tweet this!” after each one, and it will automatically go to Twitter for you!

“The key is not to prioritize what’s on your schedule, but to schedule your priorities.” - Stephen Covey (TweetThis!)

Remember the difference between a boss and a leader; a boss says “Go!” – a leader says “Let’s go!” - E.M. Kelly (TweetThis!)

“Lead and inspire people. Don’t try to manage and manipulate them. Things can be managed but people must be led.” – R. Perot (TweetThis!)

“You have to put in many efforts that nobody sees or appreciates before you achieve anything worthwhile.” – B. Tracy (TweetThis!)

“I cannot trust a man to control others who cannot control himself.” - Robert E. Lee (TweetThis!)

“Empty pockets never held anyone back. Only empty heads and hearts can do that.” - Norman Vincent Peale (TweetThis!)

“Management is a position that is granted; leadership is a status that is earned.” - K. Scott Derrick (TweetThis!)

“Discipline is doing what you do not want to do, so you can do what you want to do.” - John C. Maxwell (TweetThis!)

“People often say that motivation doesn’t last. Neither does bathing – that’s why we recommend it daily.” - Zig Ziglar (TweetThis!)

“A man must be big enough to admit his mistakes, smart enough to profit from them, and strong enough to correct them.”  John C. Maxwell (TweetThis!)

“To succeed in life we must stay within our strength zone but move out of our comfort zone.” – John Maxwell (TweetThis!)

“Optimism is the faith that leads to achievement. Nothing can be done without hope & confidence.” - Helen Keller (TweetThis!)

"If your actions inspire others to dream more, learn more, do more and become more, you are a leader.” - John Quincy Adams (TweetThis!)

“Great leaders are great simplifiers who cut through argument, debate, and doubt to offer a solution everybody can understand.” (TweetThis!)

“A leader one who isn’t worried about their own career but rather the careers of those who work for them.” - H.S.M. Burns (TweetThis!)

“Tell me and I forget. Teach me and I remember. Involve me and I learn.” – Benjamin Franklin (TweetThis!)

“A pessimist is somebody who complains about the noise when opportunity knocks.” - Oscar Wilde (TweetThis!)

“Do the hard jobs first. The easy jobs will take care of themselves.” - Dale Carnegie (TweetThis!)

Great leaders are almost always great simplifiers who cut through argument, debate, and doubt to offer a solution everybody can understand. (TweetThis!)

“People often say that motivation doesn’t last. Well, neither does bathing – that’s why we recommend it daily.” - Zig Ziglar (TweetThis!)

"Some people want it to happen, some wish it would happen, others make it happen.” – Michael Jordan (TweetThis!)

“Nearly all men can stand adversity, but if you want to test a man’s character, give him power.” - Abraham Lincoln (TweetThis!)

“When your values are clear to you, making decisions becomes easier.” - Roy E. Disney (TweetThis!)

“Ninety-nine percent of failures come from people who have the habit of making excuses.” - George W. Carver (TweetThis!)

“Negativity breeds negativity. The wise focus on the positive in every person and every situation.” - Philip Arnold (TweetThis!)

“In the business world, everyone is paid in two coins: cash and experience. Take the experience first; the cash will come later.” - Harold Geneen (TweetThis!)

“Instead of worrying about what people say of you, spend time trying to accomplish something they will admire.” - Dale Carnegie (TweetThis!)

“Vision without action is only a dream. Action without vision just passes time. Vision with action can change the world.” - Joel Barker  (TweetThis!)

“Never wrestle with pigs. You both get dirty and the pig likes it.” - George Bernard Shaw (TweetThis!)

“The best time to plant a tree was 20 years ago. The second best time is now.” - Chinese Proverb (TweetThis!)

“To accomplish great things, we must not only act, but also dream; not only plan, but also believe.” - Anatole France (TweetThis!)

“You may never know what results come of your actions, but if you do nothing, there will be no results.” - Mahatma Gandhi (TweetThis!)

“You may be disappointed if you fail, but you are doomed if you don’t try.” – B. Sills (Tweet This!)

“Opportunity is missed by most people because it is dressed in overalls and looks like work.” - Thomas Edison (Tweet This!)

“Obstacles are those frightful things you see when you take your eyes off your goals.” (Tweet This!)

“If you can’t explain it simply, you don’t understand it well enough.” – Albert Einstein (Tweet This!)

If you think it’s expensive employing a professional, just wait until you employ an amateur - Red Adair (Tweet This!)

"Sometimes when we are generous in small, barely detectable ways it can change someone else's life forever." - Margaret Cho (Tweet This!)

"Be kinder than necessary, for everyone you meet is fighting some kind of battle." - Cynthia Towers (Tweet This!)

“It was the best decision of my life. But it only happened because I made a decision.” (Tweet This!)

"Most people work just hard enough not to get fired, and get paid just enough money not to quit." - George Carlin (Tweet This!)

The secret to Happiness and Success in Life: Leave everything, every place and everyone better than when you found them. (Tweet This!)

In the end, everything will be OK. If everything isn’t OK, it’s not the end. (Tweet This!)

I really don't have any more advice for you today. Would a sarcastic comment do? (Tweet This!)